Election billboards in the Czech Republic: "Even rat poison is not enough for this vermin!"

Photo:  "Even rat poison is not enough for this vermin!" - an election billboard by the Most local authority, produced by a Czech Social Democrat

Although commentators normally point out that of the four Visegrad countries, the Czech Republic has to date remained the most democratic, the current election campaign for the forthcoming local authority elections, which will take place in  the Czech Republic on 5th and 6th October, has, unprecedentedly,  resorted to open and brazen racism.


Just as in many other European countries, in the Czech Republic, too, racism and hate speech has been normalised and made part of the mainstream since the 2015 European refugee crisis. The Czech Republic has efficient laws criminalising hatred against minorities and religious organisations, but these are normally ignored. Whenever you point out that it is a criminal offence to disseminate hate speech directed against minorities and religious organisations, you are attacked as a "bloody communist who wants to ban everything".

As a result, fake news and hate speech have become totally normalised in the Czech Republic. Many Czech media have become "experts" in what they see as muslim and immigrant crimes. The Czech media meticulously record all crimes committed by immigrants and refugees throughout Europe, never forgetting to mention the offenders' nationality, ethnicity and religious affiliation, thus successfully constructing collective guilt and instilling in the majority of the Czech population the conviction that refugees,  muslims and non-whites in general are a primitive and a violent race. They of course do not record the numerous attacks by the extreme right wing activists against immigrants and refugees.

Historically, there has been a large amount of racism in the Czech Republic, normally directed against the Roma minority. Since the 2015 refugee crisis, the hatred of the Roma seemed to have shifted from the Roma towards muslims and refugees. Now, before the Czech local authority elections, we discover that racism against the Roma has not diminished and is now expressed quite openly on uprecedentedly racist billboards.

The Czech Republic has a small extreme right wing political party, the SPD, which is paradoxically run by a Czech citizen of Japanese origin. SPD is openly eurosceptic and racist, demanding that the Czech Republic leaves the European Union. SPD billboards are now plastered everywhere in the Czech Republic. When you alight from a train at the Prague main railway station, you see this:

"No to the EU immigration policy The EU is the main threat to our freedom and security. It is a neo-marxist project whose aim it is to destroy our nation and our culture. We want to introduce a new plebiscite Act which should give us the opportunity to vote to leave the EU."

But the problem is that ALL the mainstream Czech political parties have now openly and unashamedly started using  anti-refugee rhetoric and racism in their political campaigning. In this, they are greatly supported by the Czech media. For instance, the Czech glossy newsmagazine Reflex regularly attacks the German Chancellor Angela Merkel for "not managing the refugee crisis" and the German media for "suppressing the problems with immigrants and refugees":

"ANGELA, YOU ARE NOT MANAGING!!"

Parlamentní listy, a Breitbart-like hate speech website, stands in the forefront of creating the atmosphere of intolerance. Remarkably, it publishes interviews with Czech top politicians like this:
"THE HAG HAS GONE MAD IF SHE DOES NOT KNOW THIS!

Jaroslav Foldyna, the Deputy Chair of the Czech Social Democratic Party, is extremely angry. He hates how the media and some politicians see the events in the German town of Chemnitz. In his view, ordinary citizens have demonstrated there. They have lost their patience and Angela Merkel refuses to deal with their problems. 'I suspect that the hag has gone mad,' says Foldyna, criticising Merkel's statements in which the German chancellor has accused citizens of being extremist and neo-Nazi."

A predominant majority of Czech citizens have now succumbed to the anti-refugee hysteria. Most Czechs genuinely believe that their country is in danger of being invaded by violent foreigners who will destroy their language, culture and country.

What is particularly depressing is the fact that no Czech politician has been brave enough to stand up in public and tell their people to wake up - that their hysterical fear is absolute nonsense.

On the contrary, ALL Czech politicians have started using the racist anti-minority hysteria for their political purposes. It is extremely convenient for them: If you talk only about the dangers from refugees and migrants, all the intractable political, social and economic problems which the politicians do not know how to solve, will disappear from public discourse.

The attitude of the current Czech Prime Minister, oligarch Andrej Babiš, a former communist secret police agent who is under investigation for financial fraud, is particularly shameful:

"REFUGEES? I DO NOT WANT A SINGLE ONE."

This atmosphere of hysteria and intolerance has now led to incredible excesses. Regional authorities in many parts of the Czech Republic are now using openly xenophobic and racist billboards.
The Czech Social Democratic Party in the depressed, north Moravian, formerly industrial city of Havířov, uses the following billboard:

A Facebook commentator has made a caustic comment, with regard to the above photograph, that Havířov could use some migrants to complete the building of the pavement. Paradoxically, Havířov is a city of migrants who came to work there from many other parts of former Czechoslovakia to work in the coal mines and steel works there.

The Czech Social Democratic Party, which has lost most of its electoral support over the past two or three years, has lost its status of a main Czech political party and is directing its steps into oblivion, uses the anti-refugee hysteria quite systematically:

Suffice it to say that almost no refugees come to the Czech Republic and no refugees or immigrants are threatening its borders.
But what takes the biscuit is perhaps the billboard which adorns the streets of the North Bohemian, depressed city of Most, published by the former Social Democratic Deputy Minister for Industry Novotný:

"EVEN RAT POISON IS NOT ENOUGH FOR THIS VERMIN!"

This Czech commentator points out that Facebook has removed this racist billboard from its pages. Regrettably, the billboard exists in its physical form in the streets of Most.

"WE WILL BUILD A SEPARATE VILLAGE FOR THE LOCAL RABBLE!"

The billboards are, again, implicitly directed against the Roma. It is very interesting how the hatred against the Roma, which over the past three years shifted towards the non-existent muslim refugees, has now, in an enhanced form, returned and is again directed against the Roma.
Racist hate speech billboards not being used only by the Social Democrats. This is a billboard used by the right of centre Civic Democratic Party (ODS), which has also lost most of its electoral support recently and like the Social Democrats, has lost its status of a Czech mainstream party, which in the past used to be able to form a government - no more:

"BOLESLAV IS  FOR THE PEOPLE OF BOLESLAV. NO TOLERANCE FOR FOREIGNERS!" 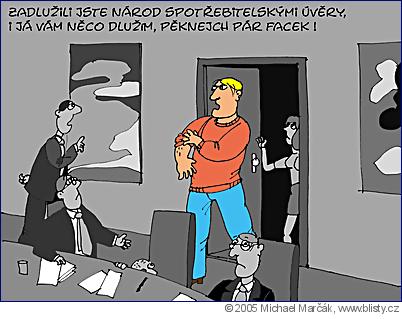