“When Experience Is Not Retained, Infancy Is Perpetual”:

The Velvet Revolution After Thirty Years

“The country that was the most communist of all”, marveled international observers in the early 1990s, “is now the most anticommunist!” The Velvet Revolution had just taken place. Czech dissidents led by Václav Havel had enchanted the world with the slogan according to which truth and love would prevail over lies and hatred. To ensure that the revolution succeeded, and that communism was irremediably defeated—including in its reformist variant—these dissidents showcased the only argument that differentiated them from everyone else (including the Slovaks): they might not be numerous, but they were no communists. In fact, they were the communists’ only real opponents. They were anticommunist.

Pundits were puzzled by the fact that the most anticommunist country of all also proved the only one in Central Europe to retain a communist party, indeed a party that consistently won 10% to 20% of the vote in the first two decades following the Velvet Revolution. It maintains a steady presence today. A logical explanation would have been that the communist regime enjoyed a base of legitimacy whose core now objectively measured 10% to 20% of the electorate (which, incidentally, yields a decent basis for a dictatorship.) They could have argued that the anticommunism of the dissidents precisely justified itself by this relative popularity. As a quick poll commissioned by Civic Forum in December 1989 revealed, only a negligible part of the electorate cited Václav Havel as potential candidate for the presidency. Hence these same dissidents insisted on having the new anticommunist president elected by the communist Parliament rather than by the people.

Meanwhile, anticommunist activists seized on the benefits of being the only individuals to have been on the right side of history in 1989—I say “in 1989” as opposed to “before 1989,” as many remained good communist citizens and functionaries until the 17 November demonstration. They seized prominent positions in the new state, and this handy anticommunist narrative has justified why they should remain in place ever since. In this respect, Václav Havel and Václav Klaus made for a tandem that functioned curiously well: Havel wanted to be a humanist while Klaus wanted to draw a thick line over the past, yet both tolerated the narrative of the anticommunists because both derived a measure of legitimacy from it. Havel retrospectively became an anticommunist hero while Klaus successfully managed to associate the communists to the progressives in a more general sense, and thereby to deal a fatal blow to the left.

This Czech anticommunism also flattered Václav Klaus’ nationalism. In the aftermath of 1989, he gushed that the Czechs were too good not only for the Slovaks, but also for the rest of Central Europe: they were more democratic and economically advanced than the other nations and hence would be the first ones to join the EU. Perhaps as an ostensible sign of its more advanced democratic stage, the Czech lustration was the harshest in Europe: the parliament set a commission to investigate the events of November-December 1989; a police department was established to investigate the crimes of the former regime; the former regime was declared by the parliament illegal and criminal; the list of the secret police collaborators was published with secret support from within the ministry of the Interior; the law of lustration was drastic and is still enacted today.

For Klaus, Poland, Hungary, and Slovakia were not quite so successful, the proof being that their respective former communists regained power only a few years after the fall of communism. The Czech Republic may be the only one to still have a communist party; however, governmental coalitions firmly excluded the party while making it a convenient bogeyman embodying the danger of the return of communism. Anticommunism became as politically correct a narrative as communism had been only a few years previously, one that almost guaranteed a career in Prague journalism, politics or academia.

With the benefit of hindsight, let us question if the anticommunist narrative has brought particular success to the Czech transition from communism:

Have the communist culprits been punished? No.

Have the oligarchs been prevented from taking over the economy? No.

Has it prevented corruption? No.

Have the people acquired the feeling that historical justice was achieved? No.

Has the communist party vanished from the parliament? No.

Has the Czech Republic entered the EU or NATO sooner than its Polish, Hungarian, and Slovak neighbors? No.

Has the communist party apologized? Not really.

Have the victims received adequate compensation, be it symbolic or financial? Not really either, or in any case not enough.

The main benefit of anticommunism as an ideology has been to advance the anticommunists’ personal careers in the intellectual sphere. As far as the ordinary people who feel aggrieved by the former regime are concerned, it has continued poisoning their life with resentment; for those who do not feel aggrieved, it has only irritated them, and they have taught their children to know otherwise – just like they had done under communism. Most history teachers do not take chances anyway and simply refrain from teaching about the communist period.

But the most damaging aspect of the anticommunist narrative for the social fabric is that it renders dialogue impossible. Last year, a lecturer at the Faculty of Social Sciences (FSV) in Prague who happens to be all at once Slovak, a priest, and a sociologist, Dr Karol Lovaš, invited General Alojz Lorenc, the last head of the infamous secret police, the StB, to a debate on the 17 November 1989 events. As usual, the watchdogs of the anticommunist orthodoxy tried to prevent Lorenc from speaking; the faculty was in turmoil and its Dean had to publicly justify this daring invitation; and Karol Lovaš was trashed on social media.

Instead of letting Alojz Lorenc speak in order to deconstruct his arguments (can it be that difficult?), analysis was replaced by indignation. Why is this bad? Because emotions can only ever be shared by the people already holding the same opinion as the speaker. It convinces only those already convinced while further antagonizing those who disagreed from the outset. Indignation is not an argument. It entrenches the country into mutually irreconcilable factions and keeps the nation from being appeased. The only people benefitting from the anticommunist status quo are the anticommunists themselves and the populists. One usefully legitimizes the other and vice-versa: the anticommunists justify their own little power and socio-political standing, the populists (from the communists to Babiš via Zeman) justify their presence by representing an alternative to this establishment. Neither has any interest in promoting reconciliation; on the contrary, they remain keen to press on with this pattern. If we leave them to it, we will meet again in ten and twenty years and nothing will have changed.

At a recent debate of the Institute for Human Sciences (IWM) in Vienna, I asked Milan Martin Šimečka and Jiří Přibáň who had proven the most successful in dealing with the communist past, the Czech Republic or Slovakia. https://www.youtube.com/watch?v=lP3u3AlLATg. Upon reflection, Šimečka answered the Czech Republic. I believe he is wrong. Despite all the shortcomings of its post-1989 development including the most sinister, last year’s assassination of the journalist Ján Kuciak and his partner Martina Kušnírová, Slovakia today is not the same prisoner of its narrative of the past as the Czech Republic is. If the situation does not change soon, Slovakia will only move forward and further outpace the Czech Republic

What is so scary about a dialogue between the communists past and present and the rest of the nation? Evidently that it might, as it should, lead to a form of societal reconciliation. But for the communists to apologize does not mean that the popular elements of life under communism—first and foremost a strong welfare state—should be denied. For society to forgive the communists does not mean that they should condone the persecution of innocent people. To reconcile does not mean to forget. It means moving forward in a constructive way instead of being mired in the battles of the past.

The damage caused to the Czech social fabric by anticommunism could not be better symbolized than by the (mis)use of the slogan from George Santayana, “Those who cannot remember the past are condemned to repeat it.” The social usage of this citation, that opened the 2007 law creating the Institute for the Study of Totalitarian Regimes, is doing exactly the opposite of what we should be doing, i.e. historicizing the Velvet Revolution and the post-communist period. Historicizing means replacing these events in their historical context in order to understand the behavior of the social actors and the obstacles they encountered. Here is an example of what such a contextualization can achieve: in Santayana’s volume The Life of Reason (1905), the sentence “Those who cannot remember the past are condemned to repeat it” is preceded by: “Progress, far from consisting in change, depends on retentiveness. When change is absolute there remains no being to improve and no direction is set for possible improvement: and when experience is not retained, as among savages, infancy is perpetual.” The paragraph is entitled “Continuity necessary to progress,” and the chapter “Flux and constancy in human nature.”

Applied to the contemporary Czech Republic, what Santayana would have meant is the exact opposite of what he has been instrumentalized for: we can paraphrase him as saying “Those who cannot remember the communist past are condemned to repeat it. Those who cannot learn from the mistakes of the communists, of the dissidents, and of the population, before, during, and after the Revolution, are doomed to repeat them. Those who cannot learn from the errors of mass collaboration and mass support for a populist dictatorship (that later dwindled into dictatorship fatigue) expose themselves to repeat them. Those who do not learn from the experience of a democracy falling into dictatorship without a hitch – twice in a row, in 1938 and in 1948 – will fall prey to any new populism with the same ease.”

Those who do not accept the inescapable continuities with the communist regime, who will not retain an experience that makes it possible to improve one’s being, who will not embrace the communist who is in them, will remain in a primitive and barbarian infancy. Santayana advocated memory, not selective memory.

In a recent interview for Deník N, Michael Kocáb perfectly expressed the schizophrenia that now reigns in the Czech Republic regarding the narrative on the communist past. To the question “Do we have anything to celebrate”, he gave two answers, one “politically correct” and one “rock & rollesque.” The political answer is that we gained freedom and independence so yes, we have something to celebrate. The rock & rollesque answer is the following: “Comrades! It has all gone to shit.”

Anticommunism has failed. It is high time to try reconciliation.

"History exists in order to give sense to our present. The use or abu... 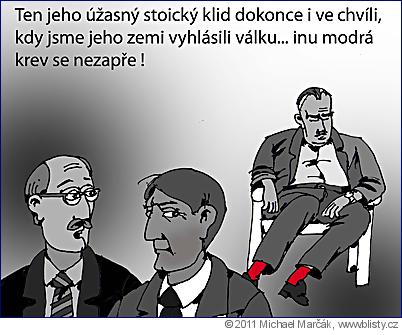